As a parent or caregiver, you are the biggest influencer in your child’s life. Research shows talking with your child about tobacco, alcohol, and drugs is the best way to protect him or her from the harmful health effects of tobacco, substance use and medication misuse.

As a parent, you can influence your kid’s decisions and make a difference. Parents have more influence in their children’s lives than kids peers, music or media. Here are ways to protect your child from the dangers and health effects of tobacco, substance, and drug use.

Because your child’s body is still growing, the affect of tobacco and alcohol use is different than it is for an adults.  It can negatively impact emotional and physical development, as well as lead to long-term health effects. Youth are often unaware of the risks of addiction, which can interfere with school, relationships, and health.

Everyday, 1,500 kids become daily smokers, and one-third of them will die prematurely as a result.
Nicotine is highly addictive for youth and it's poisonous - it is a pesticide used on crops and can be deadly if ingested.
Youth smoking can lead to lungs not working as well and is related to poor lung growth, chronic coughing, and wheezing.
Tobacco use narrows blood vessels, strains the heart, decreases oxygen, and causes shortness of breath.
Teen tobacco use can cause unpleasant side effects such as increased phlegm, acne, colds, trouble sleeping, and excess facial hair on girls.
Alcohol can have long-term effects on the developing teen brain including memory formation, personality, and behavior development.
Alcohol is a major cause of death from injuries among young people, including car crashes, homicides, suicides, and injuries such as falls, burns, and drownings.
Youth who drink before age 15 are four times more likely to develop alcohol dependence than those who begin drinking at age 21.
Alcohol lowers teens' good judgment and self-control, leading to bad decisions and risky behavior including sexual activity, increasing the chance of teen pregnancy and sexually transmitted diseases (STD's). It also increases the risk of carrying out, or being a victim of, a physical or sexual assault.
Alcohol keeps teens from doing their best in school, work, and learning new skills, which can affect them for the rest of their life.
Youth marijuana use can lead to experimentation and dependence on other drugs.
With marijuana and drug use, teens are often experimenting with dangerous chemicals and can't know for sure what they are putting into their bodies and how it will affect them.
Marijuana and drug use can have permanent effects on brain development and long-term memory, as well as impact judgment and coordination.

Devices used to aerosolize active ingredients for the purpose of inhalation.

Currently unregulated by the U.S. Food and Drug Administration, so amount of nicotine is unknown. Nicotine is addictive in any form and lethal in high doses.

Smokeless tobacco consumed by placing a portion of the tobacco between the cheek and gum or upper lip.

It is highly addictive, containing high levels of nicotine and many cancer-causing chemicals. In addition to the cancer risk, other oral side effects include concerns with gums, teeth, and bad breath.

Same risks as chewing tobacco, but faded sweeteners and flavors make it more appealing to youth.

Tightly rolled bundle of dried and fermented tobacco leaf in a series of types, flavors, and sizes.

Cigars contain the same hazards as cigarettes and are taxed at a much lower rate, resulting in lower prices.

Cigarettes made with a blend of tobacco, cloves and other flavors.

Contain the substance “Eugenol” which is a mild anesthetic that causes a person to smoke more deeply, making them even more of a hazard than cigarettes.

Contain hundreds of different chemicals, many of which can be extremely dangerous when burned and inhaled.

Hand held devices made specifically to smoke tobacco with a chamber, stem, and mouthpiece.

Use black (air cured) tobacco, which carries a higher risk of esophageal and lung cancer, even for those that do not inhale.

An instrument that mixes tobacco smoke with water or other liquid, then draws into the mouth.

The water does not filter out toxic chemicals and group sharing can increase spread of germs.

Alternative tobacco products put out by various tobacco companies with the explicit or implied claim that they are less harmful than mainstream products.

Sometimes confused with products such as nicotine gum, lozenge or inhaler, which have been approved to help with smoking cessation. PREPS are not lower-risk and are not approved for this use.

Long-term side effects may include addiction, decreased mental ability.

A prescription drug typically used to treat patients with severe pain or to manage pain after surgery.

50 to 100 times more potent than morphine, heroin, and other dangerous drugs.

Typical products such as glue, spray cans, paints or sprays are inhaled.

Inhalants are a serious risk to youth. Users can die the 1st, 10th or 100th time a product is misused as an inhalant.

A psychedelic drug known for its psychological effects.

Used as an escape drug, with possible adverse psychiatric reactions such as anxiety, paranoia, and delusions.

A hallucinogen or stimulant.

Risks of overdose includes high blood pressure, faintness, panic attacks, and in severe cases, a loss of consciousness and seizures.

Man-made chemicals rather than natural ingredients.

Due to growing number of chemicals developed, there is no way of knowing what the drugs contain and the effects are unknown.

If your child is using tobacco, alcohol, or drugs, it will be up to him or her to make the decision to stop. Your support is critical to helping them. Here are some things you can do:

Don't lecture, punish, or threaten. Show your interest in a non-threatening way by asking a few questions.

Don’t accept excuses like it's "not a big deal" or "I can quit anytime."

Find out why your child is using. Your child may want to be accepted by a peer group, or he or she might want your attention.

Discuss what changes can be made in his or her life to help them stop.

Make a list with your teen or preteen of the reasons why they want to quit smoking or stop using drugs and alcohol. Refer back to this list when your teen is tempted.

Use personal stories of you and your loved ones to show how using tobacco, alcohol, and drugs may impact his or her life.

Prepare for mood swings, challenges, stress, and social impact that these lifestyle changes may bring.

Find a local Student Intervention & Reintegration Program (SIRP), for high school-aged youth who have experimented with alcohol and/or other drugs. Find more resources and information for help with youth alcohol and drug use.

The Maine Vaping Quit Support Line is available to any Maine adult or youth, speak with a trained Quit Coach for support and get answers to your questions about vaping. It’s free and confidential! Parents, if you have vaping questions, call 1-844-9NO-VAPE to speak with a coach or email NoVAPE@MaineQuitLink.com for support.

If you are a parent of guardian, times have changed since you were a teen. It’s a different world. It’s a different time. It’s a new era! The change between then and now is a lot more serious than just hairstyles, fashion and bad to the bone sayings. Our kids today engage in behaviors and products that didn’t exist back in the day and can be a lot more harmful. There’s a lot to catch up on! Get the facts, know what to look for, and know what you can do to help prevent your child from tobacco and substance use.

Get the 411 – See How Times Have Changed

The development of youth leadership skills and youth-adult partnerships are essential to environmental and policy change around tobacco and substance abuse in Maine. Getting youth involved will help reduce and prevent tobacco and alcohol use among their peers, as well as empower them with the skills they need to create a healthy community. 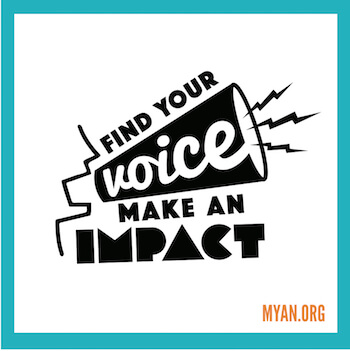 MYAN is a statewide network of support for youth and adults that connect people and programs throughout Maine with the mission of training, supporting, connecting and advocating for youth. Youth groups of all types can be a part of MYAN, including those involved in social action, prevention, mentoring, and health promotion.
Learn More 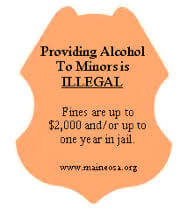 Project Sticker Shock is designed to reach adults who might buy alcohol and provide it to minors. Youth go to a store and place stickers on alcohol products warning adults about the penalties for buying alcohol for minors. The project has the goal of reducing alcohol purchased for minors, raising public awareness about underage drinking, and strengthening the impact of the law on the decision to provide alcohol to minors.
Learn More